Lucy Worsley reminds us, that fireworks were once a political and romantic instrument, and she sets about recreating a magnificent display that was once aimed at winning the heart of, and lucrative status as consort to, Queen Elizabeth I.

The historian teams up with materials scientist Zoe Laughlin in an ambitious attempt to recreate one of the earliest and most spectacular firework displays in Britain. The extravagant festivities were originally laid on by Robert Dudley, a close friend of Queen Elizabeth I, as an attempt win the Virgin Queen’s hand in marriage in 1575, and Lucy travels to Italy for clues on how to make the Tudor equivalent of a Catherine Wheel.

We provided drone footage of the fireworks to capture the display in all it’s glory.

Read a recent article here from broadcastnow.co.uk on how the program was filmed and to gain insight into the people behind the production. 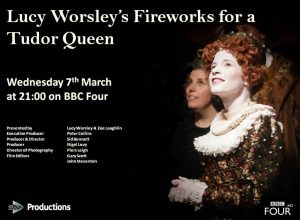 Read more: A good week for history on TV as Lucy Worsley and Mary Beard bring the past back to life

FPV drone fly through video shows a great night out at London bowling alley! After the...

Have you been tuning into this years multi-award winning Ant & Dec’s Saturday Night...

The Red Nose and Spoon Race...

This March, we filmed The One Show’s Alex Scott and Jermaine Jenas as they competed in...